When I first came to Dawson in late September and scoured the town for hangouts, Bombay Peggy’s floated to the top of the list. Don’t get me wrong, the Billy Goat, Downtown, Eldo and the Pit are fun, but Peggy and I became fast friends.

Maybe it’s the sense of history, or the original art on the walls, or the great bar staff. Maybe it’s the proximity to KIAC, making it a natural gathering place for avant- and apres-shows. Or maybe it’s the martini menu – “the sassiest in town” – with names that make hardened miners blush.

In addition to finding new hangouts, I felt it was important to establish a few goals when I first came to Dawson. Chief among these was trying each of these cocktails, except for the “Bloomer Remover” since my palate has not yet been able to distinguish between a gin martini and nail polish remover. 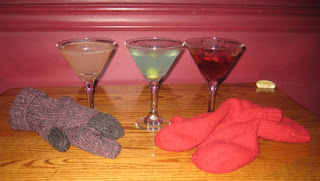 Steadily over days and weeks I worked toward my goal, encouraged on my journey by various new friends. By last night, the close-down-for-the-season party at Peggy’s, I was to have tried them all. As the good people of Dawson and environs crowded into the cozy space, though, the liquor ran dry and my goal remains just out of reach: I never had the Flagrante Delicto. 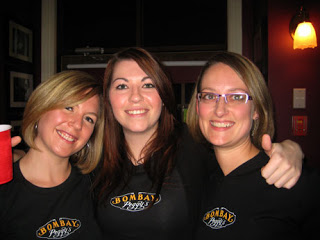 It was hard to be too disappointed, though, surrounded as I was by friends at one of the biggest cold season whoop-ups of the region. There were the writers and artists, the nurses and doctors, the mining explorers, and one ponytailed guy in a sheepskin vest dancing to beat the band. Server and sometimes burlesquer Rachel Wiegers (who was profiled in this month’s Up Here magazine) was in her fish-netted finest. There was a general atmosphere of good ol’ fashioned fun. 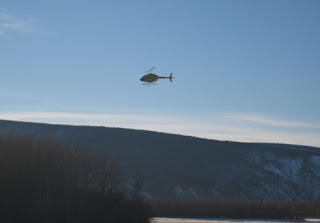 I heard rumours that at least one person stuck in West Dawson during this extended freeze-up called upon the services of Trans North Helicopters for an airlift to the party!

I’ll miss Peggy and my other new friends – some of whom are leaving town this weekend – but I know I’ll be back. After all, I still have one martini to go!

43 thoughts on “Battening Down the Hatches at Bombay Peggy’s”