Dawson may be known for the Klondike gold rush, Jack London, Robert Service, and Pierre Berton. But it has another claim to fame – the Sourtoe Cocktail – and last night I was inducted into the club as member #39600. 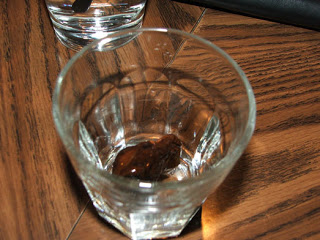 After dinner at the Drunken Goat we ambled over to the Downtown Hotel, home of the Sourtoe. We sidled up to the bar and announced to the bartender, a lovely aussie lady, that we were there for the toe. After steeling us with a round of liquid courage, our barkeep went into the backroom and emerged with a medium-sized wooden box. From that box, she removed a large dessicated toe from a jar of coarse-grain salt. And she put it on a napkin on the bar. In front of us. 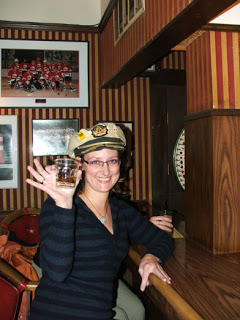 We all looked at this salt-encrusted toe for a moment, remarking that it looked like a large dried date. Except if you looked closely you could see the toenail (my advice – don’t look closely). The next step: selecting our liquor. It has to be over 40 proof and tradition dictated Yukon Jack, so that’s what we did. Also, since it’s 80 proof we figured we were twice as safe!

The other rule? The toe must touch your lips!

Elaine went first since she was desperate to get ‘er done and over with. With a swift movement of the wrist she downed her shot and kissed the toe in one go. She was officially in the club! 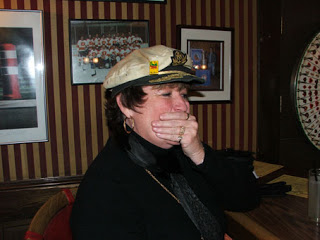 Next up was Sandra – our friend’s mother – who had just arrived in Dawson the day before. Our bartender removed the toe from Elaine’s glass and placed the now-glistening appendage back on a napkin. Now it looked more like a sundried-tomato straight from the jar. Nevertheless, this farmer-rancher and liquor store owner from Alberta did us all proud. Another one joins the club!

Finally it was my turn. Glass of Yukon Jack in hand, toe in glass, audience in place I gulped it down, feeling the giant toe hit my lips (which were closed as tightly as possible since I’d heard one guy swallowed a past smaller toe!). Putting the glass down on the bar with authority, I tipped the Downtown Dick hat at my friends: I was now part of the club as well. 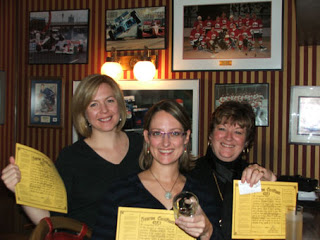 I’m still not sure what it is about humans that nearly 40,000 people would pay good money and travel to Dawson to do such a strange ritual. I know many folks think it’s ridiculous. And it is. But it’s fun – so join the club!

One thought on “Doing the Mighty Sourtoe”