I’m currently sitting in the Regina International Airport (Saskatchewan, Canada) awaiting a flight to Calgary, to make my last stop on this first book tour.

I wasn’t supposed to be in an airport this trip. On May 19th I loaded my luggage and dog, Riker, into the back of my Honda Element. After a four-day solo drive and a pick-up of 10 cartons of books, I arrived in Montpellier in the Laurentians north of Montreal. What was supposed to be a quiet time to regroup and visit with family ended up zooming by. The next thing I knew, I was off to my talk in Montreal the 27th, had my book launch and talk in Ottawa the 28th, and attended the Laurentian reunion the 29th. 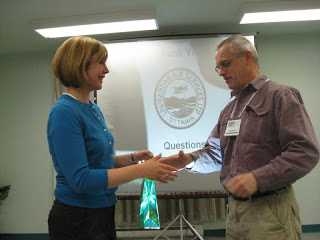 Early June 2nd, I piled my stuff, Riker, and my husband Doug (who had flown up from Wyoming) back into the Element and we headed off on the Trans-Canada highway. Unlike the American interstates, this highway carves its way through the Canadian backcountry in single-laned, pot-holed glory. The speed limit is 90kmh (roughly 55 mph).

By noon on June 2nd we made our first stop in North Bay, Ontario at the Discovery North Bay centre. After I did my “superman routine” (changing out of travelling clothes into more authorial gear in the bathroom) local journalist and writer Doug Mackey joined me for a small but enthusiastic group talk on history and our books, and Laurentian pilot Brad Mackie and his family stopped by for a visit.

Then we hopped back in the car and headed to Sudbury with some trepidation. You see, the last time we were in Sudbury in 2005, Doug had a minor fender bender with a taxi at the gas station. We don’t tend to have the best luck there, and this time was no exception. While we had an event scheduled at a local indie shop, One More Bookstore, and we’d all done our best to advertize, the turnout was a little underwhelming. We did have a chance to get to know the owners and left with a bunch of Timbits for the next day’s drive, though. 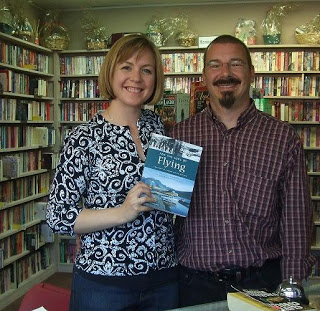 Me with One More Bookstore (Sudbury) owner, Denis Dupuis

Day 2 (June 3rd) started with us feeling a little unsure of what the day might bring. We loaded everything and everyone back into the car and drove off for Sault Ste. Marie, Ont. (known as The Soo) where I had a signing scheduled at the Canadian Bushplane Heritage Centre. My spirits lifted significantly when I saw they had an announcement out front indicating an author signing (me!). We took the dog for a walk, ate our sandwiches at the picnic tables out front, and I impressed the pants off Doug when I guessed correctly that the aircraft out front was a Beech 18 on wheel-skis! 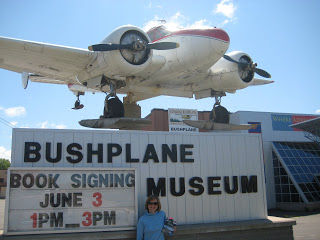 Our time at the Soo went wonderfully. We had a steady stream of folks come in to chat, buy books, and even a member of the local media came by for some photos and an interview. I also made some great contacts with people at the Ontario Ministry of Natural Resources (MNR).

By 3:30pm we were back on the road headed for Wawa, Ont. Wawa’s most famous for its huge Canada Goose, which is possibly the most photographed statue in Canada (other than the huge Nickel in Sudbury). After being stopped for speeding by the friendly neighbourhood Wawa police (we were let off with a warning) we spent a couple of hours at the local library chatting with people and selling books. Then we headed to the Northern Lights Motel along the Trans-Canada where humorous, personal touches abound. We couldn’t stay long to enjoy them, though, as we were off to a major bookstore signing in Thunder Bay early the next morning….