For the past month I’ve been volunteering at the Rock Springs Humane Society here in Wyoming. I’ve been really enjoying spending time with the animals (and the people) at the Society, but I also love all the behind-the-scenes work I’ve been doing organizing fundraisers and other events.

Yesterday we put on the 3rd annual Dracupaws fundraiser. People bring in their pets (and kids) – mostly in Halloween costumes – for professional photos by a local photographer. It was so much fun! We had little doggie witches, vampires, hotdogs, and even Pippi Longstocking. A few brave souls brought in their cats (one was a cowboy!) and we even had one baby Alligator named Isis!

One lady and her daughter came when we were cleaning up (she’d gotten the times mixed up) and the photographer had already gone home. So, I pulled out my digital camera and took some photos of her SEVEN dogs, including: two Great Danes, a Great Dane mix, a Mexican Hairless (seen above), a King Charles Spaniel, a teeny Pomeranian, and a Pomeranian mix. She and her daughter had apparently spent almost 40 hours on their seven costumes.

Toward the end of the afternoon I called up Doug (who actually had a day off!) and asked him to bring in Riker for a photo. We took one of the loaner costumers – a Dracula cape – and tied it around his growing neck (this is probably the only year where doggie costumes will actually fit him!). We got a family photo done, but it also gave us a chance to introduce him to some other nice dogs. It seems like whenever we take him for a walk (which is about 2-3 times a day) we hear lots of dogs behind fences and inside houses, but never see any out and about with their owners. I may just have to borrow a dog from the Society and take the two out for a romp! 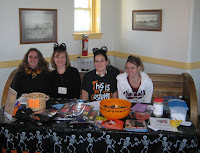 Here we are, the Dracupaws crew (l-r): Judy (board member), me, Kate (director), and Kayla (volunteer).