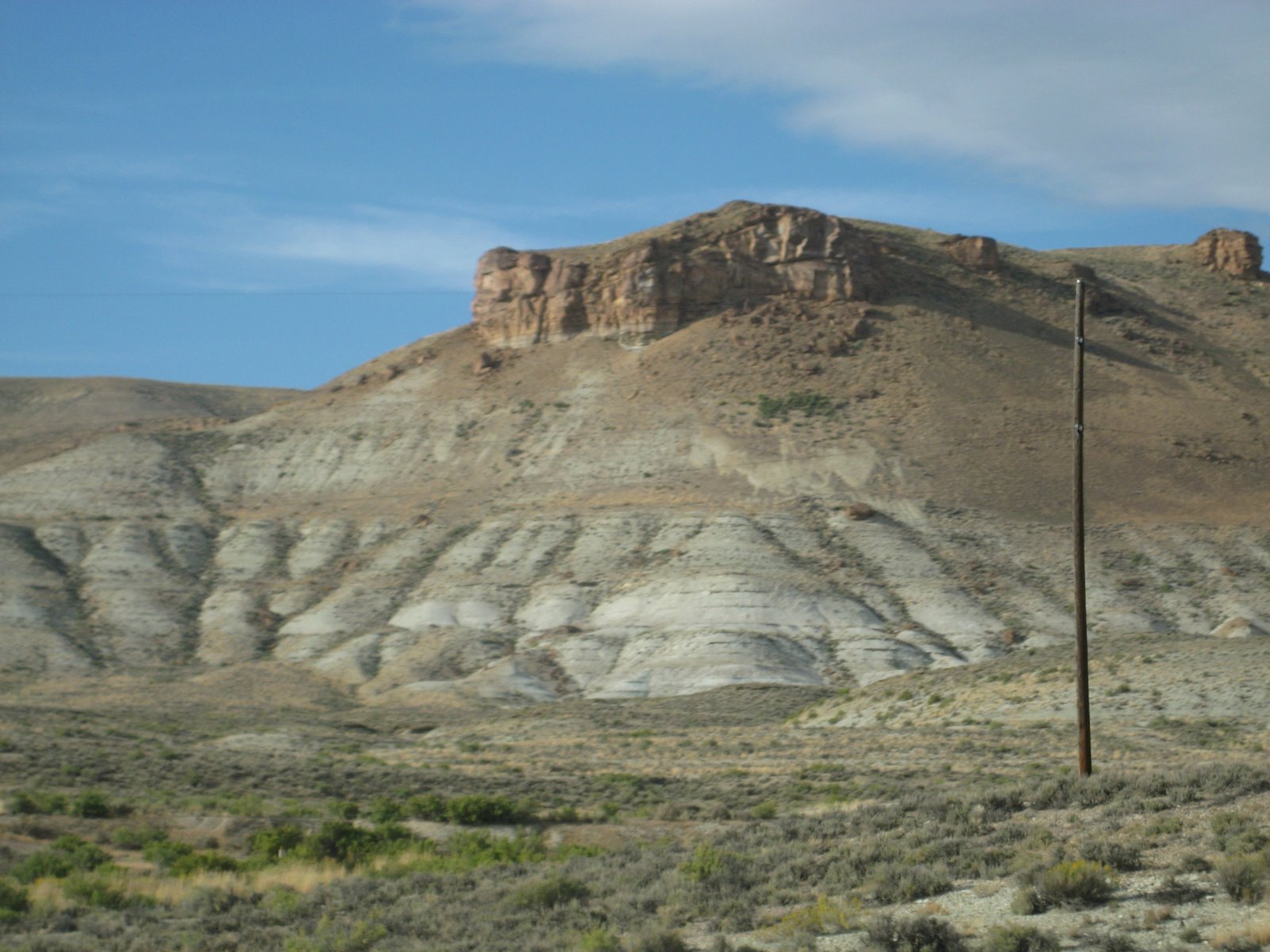 This pretty much sums up the climate and elevation of our new hometown of Green River, Wyoming: the city sits at a lofty 6100 ft (1859 m) above sea level and is a green oasis surrounded by scrubland, sand dunes, and the Red Desert. To put this in perspective, nearby Denver, Colorado – the so-called ‘Mile-High City’ – rests at a mere 5280 ft (1650 m) above sea level.
During the drive cross-continent from Ottawa, Ont. (Canada) we didn’t notice any dramatic increases in elevation. Unlike crossing the Canadian Rockies or even the Washington Cascade mountains, we didn’t experience much ear-popping or other signs that we were radically shifting altitude. We kept tracking the elevation gains on the GPS and it said we were regularly inching toward the sky, but we still couldn’t feel it physically for the first few days.
We felt the change in humidity first. We had just left a hot, muggy summer in southern Ontario where you constantly felt damp. Three days into the trip we arrived in Cheyenne, WY (elevation around 6000 ft or 1828 m). I woke up at 4:30am with massively dry sinuses and steamed up the bathroom to get some relief. Doug’s cuticles began to bleed. Both of us were afflicted with the dreaded knife boogers.
Day Four we arrived in Rock Springs, WY – Green River’s neighbouring city – and checked into the Hampton Inn. I had continued training during the roadtrip, using the stationary bike at the hotel in Lapeer, MI and going for a jog in Des Moines, Iowa. After all, there were only a few weeks left until the CIBC Run for the Cure and I needed all the training days I could get!
Feeling pretty confident about my fitness level I went down to use the Hampton Inn’s gym my first day. Oh. My. God. I had read about altitude sickness and some of the difficulties athletes and mountain climbers encountered when rapidly shifting elevations. Up until that point, though, I had mostly been driving. It wasn’t until I started jogging that I fully realized we weren’t in Kansas anymore – it felt more like Mount Everest!
As per internet advice, I drank twice as much liquid and ran half as fast. All the discussion forums I’d come across said the key was to go low and slow. So I set the incline at zero, jogged barely above a walk, and somehow managed to complete two 25-minute sessions during our stay at the hotel.
Next step: out into the real world. When we moved into our townhome in Green River there was tons of physical activity involved. We had the Uhaul to unload, heavy boxes and purchased items to carry up and down stairs, and never-ending errands to run. Now, Doug and I are not Olympic athletes, but we can usually handle pushing a grocery cart up a small incline without huffing and puffing!
The real test came when it was time to resume our training activities. The first two jogs out we almost died (no controlling the incline out on the streets of Green River!). Our first tennis game felt like we were playing on Mars (because the ball bounced so much) with cystic fibrosis or emphysema. I regret all the times I took for granted the ability to breathe. It really is a wonderful thing. 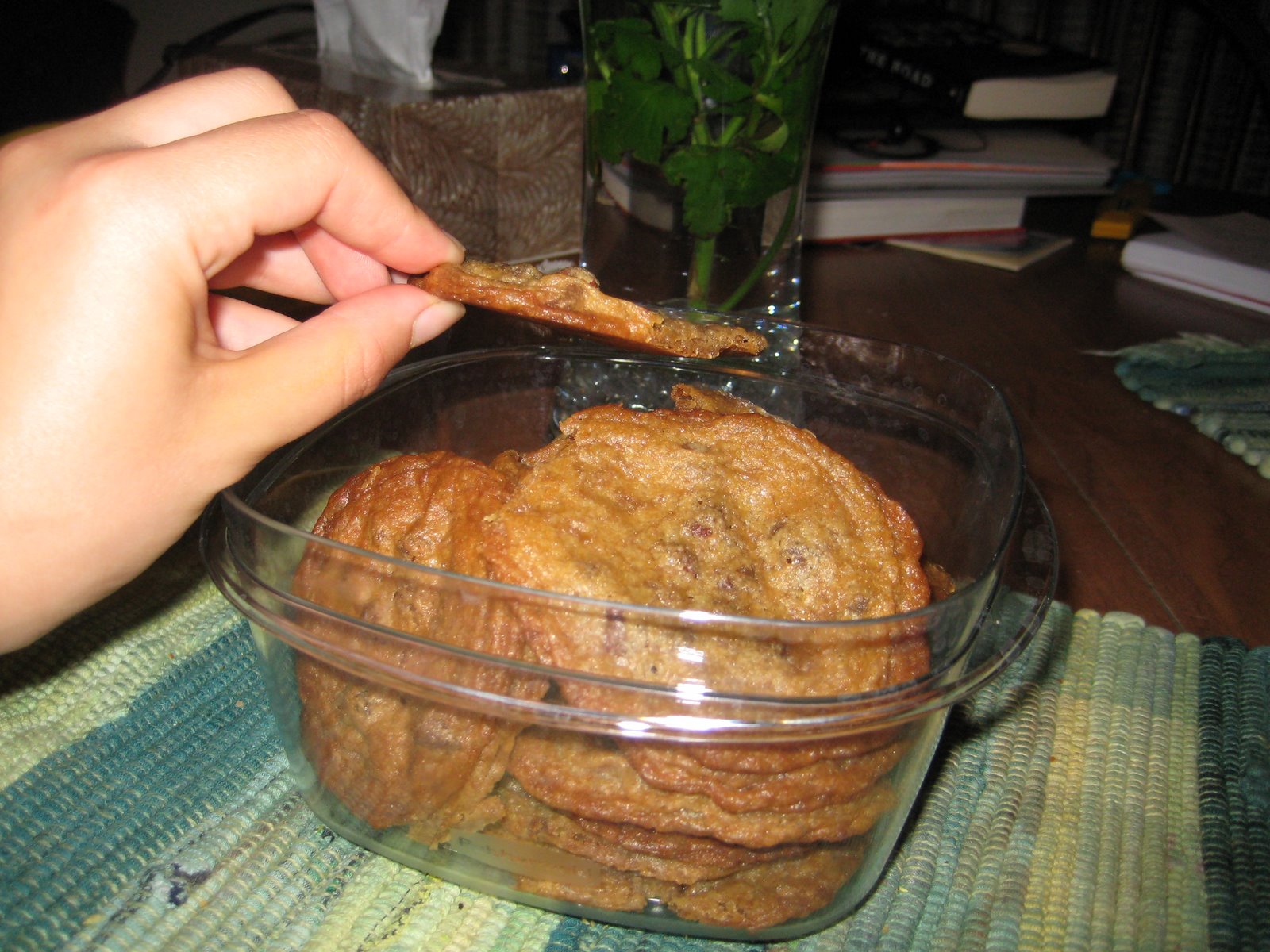 Aside from the elevation’s impact on our bodies, it also affects cooking and baking. Water boils faster (which means it doesn’t get as hot) so cooking pasta, rice, etc takes longer.
I also haven’t quite gotten the hang of baking, as you can see from the photo of the chocolate chip ‘cookies’ at right. Doug thinks I should just come up with a clever name for them and pretend like I meant to do it. Apparently flour is drier at higher altitudes so you need more liquids, less leavening power (baking soda/powder), and sometimes higher baking temperatures.
I was never a chemist and so don’t really fancy fiddling around with measurements in the hopes of coming up with the perfect combination. Instead, I think I’ll just buy a copy of Pie in the Sky: Successful Baking at High Altitudes. I’ve also found some recipes on the internet – including one for chocolate chip cookies that shouldn’t turn out like flat tires!
Wish me luck!

One thought on “Feeling High and Dry”