Skip to content
Doug and I began our move to Rock Springs, Wyoming this morning! At 6:45ish am we pulled out of his parents’ driveway in Ottawa, ON in our 10ft Uhaul truck with the Mini Cooper on a flatbed trailer behind us. 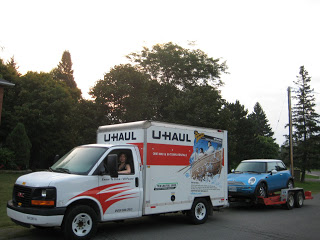 Things were pretty uneventful until my second shift of driving when I had to slow to a crawl on the 401 just before London, ON because a tractor trailer had blown a tire. I was blocked in on both sides and with big wheels and high clearance we decided to drive over it. That seemed to work and we were on our way again!

The next big hiccup was the US-Canada border. We crossed at Sarnia, ON and met with a delightful border guard at the initial check point. Then the fellow that helped us park so we could go in to US Immigration was cheerful. By this point we were thinking how nice the US officers were and were feeling pretty good about processing Doug’s work VISA application. Big mistake!

We ended up with a jerk on a powertrip who decided that the letter Doug’s immigration lawyer provided did not meet NAFTA (North American Free Trade Agreement) standards. At one point, he said that the job description for ‘Junior Field Engineer’ sounded easy enough and he thought he could do it with a bit of training. Doug, who is far too modest, perhaps did not emphasize enough his SEVEN years of post-secondary education and the fact that he is going to be handling multi-million dollar pieces of equipment; eventually supervising field technicians; and then going to help design and modify this expensive equipment at a research centre in Edmonton.

This guard apparently also did not think that I should be a participant in the conversation since it was not my work visa being processed and strongly suggested I go and sit down. This ‘Little Lady’ was some pissed off and silently stewed in the ‘controlled reception area’. Then the guard was asking Doug all these questions about me and my work – and never bothered to ask me!

We understandably had a lot of steam to blow off in the truck after we played nice and bit our tongues. Luckily my next encounter with a real, live American was the wonderful desk manager at our hotel in Lapeer, Michigan. Faith restored!!

Now we’ve had a swim in the pool, had some food, and made sure that Guinness still loves us. Time to watch the Colbert Report and get some real American news on the upcoming US election. 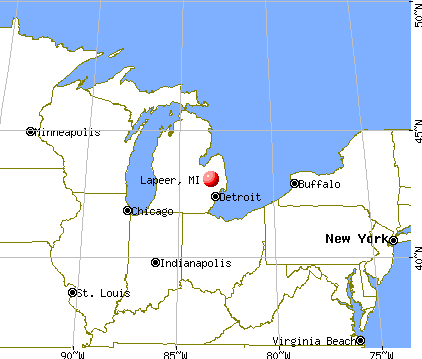 One thought on “Here in Lapeer (Michigan)!”