Skip to content
We may be stuck in a holding pattern when it comes to the move from Wyoming to Edmonton, but at least I know where I’ll be living from October to December of this year: the Yukon!
I just got a call from the Writers’ Trust of Canada that I was chosen for the Berton House Writer’s Retreat in Dawson City, YT. For three months I get to live in this town of 1,300 “hardy and generous” people (as one visitor described them), work on my projects, explore the area, and bask in bookiness.

As you can see from this map, Dawson is north – waaaay north – even further north than Edmonchuk, which many in southern Canada consider to be an arctic wasteland. It is above the 60th parallel (and not that far from the arctic circle). It is a one-day drive from Edmonton, a 13-hour drive north of Whitehorse and a 13-hour drive from Anchorage, AK. And I can’t wait!
Now the fact that it’s so north means it will get cold and dark very quickly. I’ve already checked climate and sun tables and when I get there in early October daily highs will be around freezing with about 11.5 hours of daylight. By the winter solstice that will drop to “freeze your arse off” (official terminology) and 3.7 hours of a sun that barely peeks over the hills. So I will be packing my woolies and my personal happy light.
I will be living in this cozy two-bedroom bungalow, the childhood home of legendary Canadian historian, Pierre Berton. Since 1996, over 40 other Canadian authors – including one of my heroes, Charlotte Gray – have spent time here, and I am hoping to soak up all that collective creative energy.

Above: Berton House. Apparently in 2006 HGTV’s Design Guys featured
the house on their show and made over the interior.
Below: Pierre Berton, who passed away in 2004, was a prolific writer and brought Canadian history to the masses. The year before he died he published a memoir/writing guide called The Joy of Writing. I read it after I finished my M.A. in 2007 and was looking for reassurance that I might be able to make a living as a popular historian and fiction writer.
Now he’s helping me again – thanks, Pierre!

During my time in Dawson I’m also planning on doing some serious research for my history of aviation in Canada’s north. Not only is there a northern-themed library on-site, but there are great-looking libraries and archives in the region. Plus, I’m hoping to chat up anyone who’ll talk to me about local aviation history… I’m guessing that’s what the program’s stipend is for, right? To buy beers (or Sourtoe cocktails) in exchange for stories?

The only downside to this grand adventure and honour is that I’ll be separated from Doug and the pets. Doug is hoping to take a couple of weeks off work to join me in October, though (besides he ran off to Scotland for three months of training last year!). And after repeatedly wrestling Guinness-the-cat off my keyboard, etc this morning, I’m not feeling terribly misty-eyed about leaving the animals behind. (Do you know how unnerving it is to have a cat staring at you when you’re struggling with a scene in a novel?)

So in addition to the grand adventure of moving to Edmonton sometime in the next month or so, I get to be writer-in-residence in a very cool place later this year. I have a feeling getting material for this blog will not be an issue…

Dawson is right on the Yukon River and the scenery looks amazing. Doug’s looking forward to doing some recon for a future canoe-camping trip. 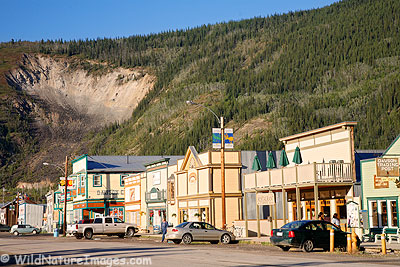 Above: Main street in warmer months with a view of the ancient Moosehide landslide.

Below: Main street when I’ll be there: dog sled central. I will HAVE to try that!