I’m taking a break from reno work in Edmonton for the next week and focusing on my ‘real’ work: writing, researching, and promoting myself shamelessly. So yesterday morning I packed up the Mini Cooper -still sporting Wyoming plates – and jumped on Highway 16 out of Edmonton headed for British Columbia.

A few months ago I was invited to go to Vancouver to give talks to the Quarter Century in Aviation Club and the Langley Aero Club. Back then I was so young and naive. I thought I’d have a completed draft of my novel (I’m halfway there) and that all the renos on the new house would be done (I’m a quarter of the way done the interior. The yard/exterior is a whole other story!).
These were some of my thoughts during the first couple of hours on the road yesterday. Once I spotted the Rockies heading into hour three, though, the buzzing in my brain largely stopped as my eyes struggled to take it all in: the mountains, the aquamarine lakes near Jasper, the herd of mountain goats chomping happily on grass at the side of the road. 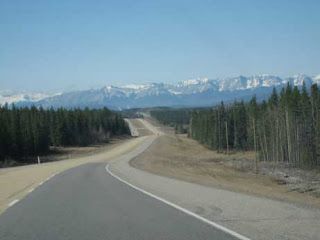 This was my first time driving the western leg of the Yellowhead Trail (Highway 16’s more colourful name), named after an Iroquois-Metis guide who apparently had blond-streaked hair and was dubbed “Tete Jaune” by French Voyageurs at the turn of the 19th century. 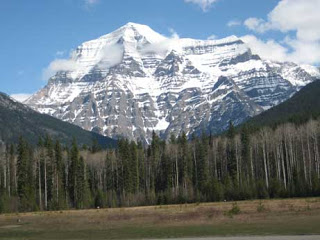 Two centuries later another traveller with blond-streaked hair – me – was taking the same route, gazing at the same peaks towering over the forest. In the above photo is Mount Robson and below is what you see when you turn around. You are literally surrounded by snow-capped mountains. 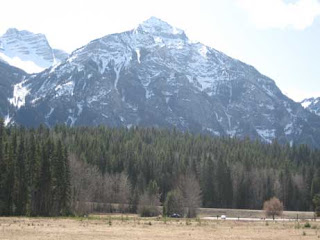 Signs of spring were everywhere, even though on the west slopes of the Rockies there was still a foot of snow on the ground. When I took a break at midday it had warmed up to about 15 degrees and you could smell the warm ground and pine needles. There were butterflies and bees and looking close up at the trees, the first tentative bits of green were pushing through. 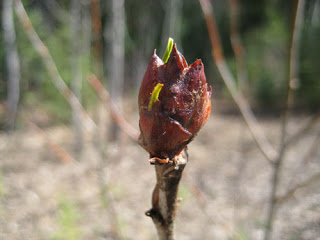 After my Mount Robson break I didn’t stop again until I reached my day’s destination of Kamloops, B.C. The scenery in the Thompson-Nicola valley is also beautiful but during the last half of my 9-hour solo drive I admit I was mostly concentrating on staying awake and wondering if I’d find a Tim Horton’s (I was seriously jonesing for an iced cap!).

At 4 p.m. I arrived in Kamloops and realized I’d forgotten the power cable for my GPS. How to find my B&B; or the rest of my stops on my week-long journey? Luckily I was given directions to the local London Drugs and found the necessary hardware (and a Tim Horton’s!) and made it to the Wedgewood B&B;, although in a bit of a daze.

I had very good intentions of working during the evening but after a walk, dinner at nearby Hoodoos Restaurant, and a cocktail (for medicinal reasons) it was lights out at 8 p.m. Pacific Time.