Most of our trips this year have been into the backwoods and we are generally happier in low-density areas, but we decided that one place on our must-see list while we’re in Wyoming had to be Vegas, baby!

So I spent hours scouring the web looking for the best deals and Sunday, November 15th we packed up the Mini and started the 9-hour drive accompanied by Vegas-themed music. Other than some dicey roads on some of Utah’s mountain passes, the ride was pretty uneventful. Even so, 9 hours is a long car-ride and by the time we pulled out of Nevada’s desert into the insanity of the city, we were tired and more than a little overwhelmed. 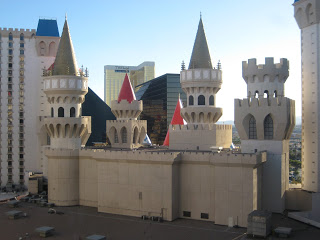 With the help of our trusty GPS, though, we managed to exit the I-15 and find our hotel for the night, the Excalibur. This taste of “Merry Olde England” is like Disney’s the Magic Kingdom on crack. It was huge: the parking lot could fit more cars than exist in our whole town of Green River, and we had no idea where we were supposed to go. So Doug pulled off to the side and I jumped out to try and find hotel registration. Entering the building I have to admit I fought a panic attack. It was dark, smoky, and the ring of slot machines echoed off the walls. I stayed focused, though, and made my way to the registration desk. Clutching our room keys and reciting my parking directions like a mantra, I plunked back into the Mini and took a deep breath.
Doug and I found parking and then wrestled our bags into the building. In Vegas, you have to walk through the hotels’ casinos to get anywhere, so we pulled our suitcases between rows of one-armed bandits (slot machines), trying to home in on the elevators. Up, up, up and we were in the silence and safety of our very nicely appointed tower room.
While my first instinct was to curl up in a ball and rock back and forth, I summoned my strength and we went to collect our welcome drinks, play the penny slots for an hour or so, and then go to our dinner show, The Tournament of Kings.

It was a blast and smoke-free, since it’s considered a restaurant (and family-friendly). We sat in the ‘Dragon’ session and cheered for the bad guy who kills King Arthur and booed for all the other kings: Russia, Norway, Spain, Ireland and so on. The best part, as Doug demonstrates below, is that we didn’t have any utensils to eat our Dragon’s blood soup (tomato), pheasant (chicken), or dessert. We even got to drink out of tankards and sing drinking songs while we imbibed our Pepsi products. Doug’s only problem is that he’s allergic to horses and had forgotten to take Merlin’s magic pill (Claritin)… atchoo! 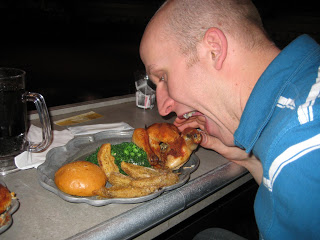 After the show we decided to explore The Strip a bit, and wandered down to the Luxor where ancient Egypt has been re-created, and then to the Mandalay Bay, a posh hotel where our martinis cost $12 a pop (tip: in Vegas you can get 4-star rooms for dirt cheap, but they nickel and dime you everywhere: like no coffee in the rooms – so you pay $4 in the in-house Starbucks). Luckily Doug managed to cover the drinks with his blackjack winnings…

We got to sleep early the first night because I wanted to be in top form for shopping at the Las Vegas Premium Outlets: 150 stores full of deals waiting for me! A much better gamble than the slots, in my opinion, and I was right. I’m glad we got there early – by 2pm it was overrun by people and the line-ups were snaking all over the place.

It was time to check in to our second hotel, New York New York, anyway, so off we went. I immediately liked NY NY better than Excalibur in terms of layout and adult-orientation. It was also less smoky and noisy, and they’ve tried to re-create a little NYC neighbourhood with shops, restaurants, and bars.

We decided to eat at the hotel’s laid-back restaurant, America, and Doug got one of the best burgers I’ve ever had. My veggie club was good too, but I kept ‘helping’ him out. Then I screwed up my courage and we hit the $5 blackjack table. I had decided pretty early on that I didn’t like the slots – sitting there pushing a button endlessly didn’t appeal – and after watching Doug play and practicing on a 25 cent video terminal, I felt ready to give it a go. I was also feeling pretty lucky after scoring a pair of knee-high black leather boots for $56 at the outlets!
My beginner’s luck didn’t fail me and at the NY NY casino I won about $80 at blackjack. Then we decided to wander up the Strip toward the more European casinos: Paris (where Doug lost a chunk of cash at the Caribbean Stud table) and then on to the Monte Carlo, where I won another $50. 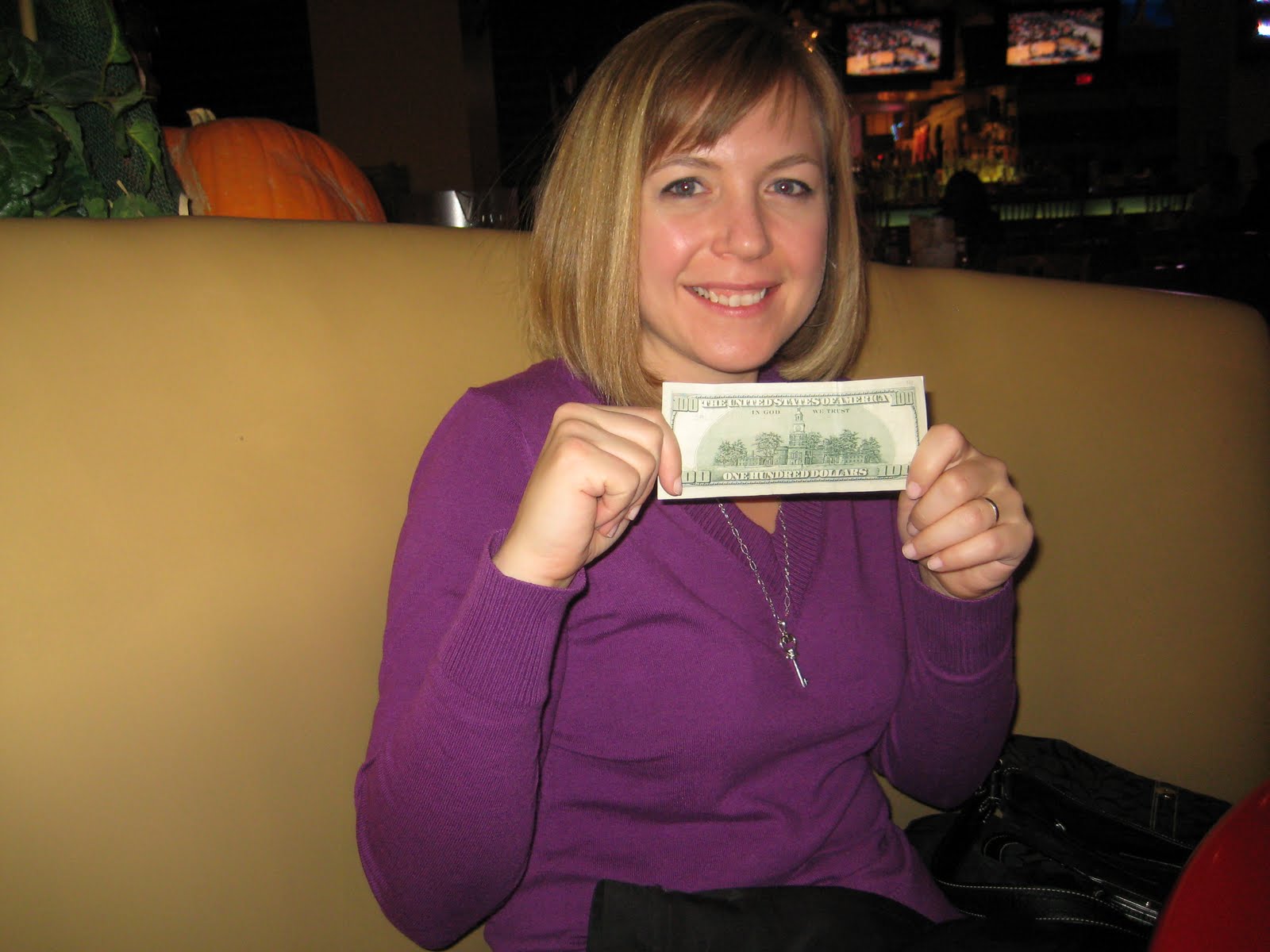 By midnight it was back to the America restaurant where I sprung for a banana split for Doug and I to share.
The next day involved a long nap (even when I go to bed at the witching hour I’m up at 6am – so I end up feeling pretty witchy…). I also managed to lose all my winnings plus some by noon but then was back at even a little later. That evening we headed across the street to the massive MGM Grand hotel and casino in search of our ‘big meal out’ (i.e. fancy, pricy fare). We were aiming for seafood and there were several options, but when we spotted a happy hour at the Sea Blue where pints of Fat Tire were $2 and oysters and jumbo shrimp were $1 a pop, we abandoned the plan and stuffed our faces for $25. We also met some lovely people at the bar including a harpist from Hamilton, Ontario named Alyssa who had just released her first CDs.

At 7:30pm we wandered back to NY NY and rounded out our meal with pretzels and ice cream. Not a vegetable in sight, but that’s Vegas. Then we headed to bed early after setting our alarm for 3:30am to make our flight to Edmonton Wednesday morning…

39 thoughts on “A Sejour in Sin City”