From Vegas we flew north – way north – to the city of Edmonton, Alberta, where Doug and I will be moving sometime in the next few months. Doug had a one-day orientation scheduled at his soon-to-be workplace the day after we were scheduled to drive back to Green River from Vegas, so I decided it might make sense for both of us to fly up on a fact-finding mission (I’d never been to Edmonton before). Plus I didn’t want to drive the 9 hours back to GR by myself if I could help it!

It also turned out that a round-trip fare from LAS to YEG was $279 versus the $800+ from our closest regional airport, RKS. And of course it didn’t hurt that his company was paying Doug’s flight and our hotel for four days either.

Here’s a little map to help people get their bearings.
For those Americans among you, Alberta is the province
directly north of Montana!

So off to Edmonton we went, after leaving the car in the NY NY Casino & Hotel parking lot and taking a taxi to the LAS airport at 4am (tip: it costs $10 in cab fare, the parking at the hotels is free, and the parking at the airport is upwards of $10/day. Don’t worry, we checked: they wouldn’t tow us!).

After a short stopover at the Salt Lake City airport, we landed at YEG around 1pm. There we were met by a shiny black luxury sedan sent by the company to ferry us to our hotel. I tell you, there are a lot of frustrating things about the company Doug works for, but sitting on those leather seats with more legroom than I’d had on the plane, I loved ’em… And I loved the company even more when I saw where they had booked us: a boutique hotel on Whyte Ave in the heart of Old Strathcona.

The Metterra on Whyte is nothing short of amazing. The whole place is decorated in an earthy-zen way, there are soaker tubs in the bathrooms, a wine and cheese every evening at 5:30pm, and a deluxe continental breakfast each morning. There was also a great fitness room that was like my personal gym, and a business centre with two computers and a printer that was basically like my personal office except when I ‘had’ to share it with the co-host of the Discovery Channel Canada’s Daily Planet show, Jay Ingram. I am a huge nerd, loved the show when I lived in Canada, and was quite ‘chuffed’ when I got to meet him in person!

Maybe one of the best parts of the hotel was the ‘hospitality suite’ where breakfast and the wine and cheese was served. 24 hours a day you could find coffee and tea as well as one of the coolest coffee barrista robots ever: it was a machine with a touch screen that would make you anything you wanted from hot chocolate to caffe mocha. I made it my mission for our stay to try out as many combinations as I could… flavour shot? decaf or caf? So many decisions!

We didn’t take the time to enjoy all these fine amenities right away, though. First we went next door to Julio’s Barrio Mexican Restaurant to grab a quick plate of nachos (our driver recommended them) and at 2pm met our realtor, Janet Bossert, who picked us up in her silver Subaru Outback and took us on a tour of the city.

After seeing a few semi-dilapidated properties at the top of our price range in the more desirable parts of town (i.e. closer to the University, Old Strathcona, etc) we were more than happy to refocus our search nearer to the research park in the southeast corner of Edmonton: Mill Woods. But that would have to wait until Friday, after Doug’s nail-biting day of presentations, interviews, and informal chats the next day.

Thursday I caught up on some work, worked out, and tested the public transit system by busing it downtown to the Edmonton City Centre. Apparently, Edmonton has the highest level of shopping per capita in North America. I don’t doubt it! I spent a few hours at just one of three downtown shopping centres and didn’t even make it to the shopping mecca – the West Edmonton Mall, with its 800 stores, skating rink, wave pool – or to the big box store development in the south end (Ikea! Home Outfitters! Pier One!).

Edmonton is also one of the greenest North American cities with its parklands, off-leash dog areas, bike paths, and massive recycling program. Sounds like a great combo to me!

Over the next few days Janet-the-realtor drove Doug and I around looking at several more places and grabbing lunches at great spots like the Maurya Palace Dining Lounge (weekday lunch buffet for about $10) and Earl’s, where the three of us split an amazing slice of gingerbread cake for dessert.

Doug and I also explored the gastronomical offerings of Old Strathcona by trying a different cuisine each evening for dinner. Night #1: The Keg, where we feasted on sirloin and king crab legs. Night #2: Chianti Cafe (known as Chianti’s by the locals) where the hand-made pasta melts in your mouth and the 1/2 portion with a salad is plenty. Night #3: Yianni’s, a Greek restaurant that doesn’t look like much from the outside but is warm, vibrant and bustling inside. Plus, we got to sit in a cozy booth downstairs in the lounge where we chilled on cushions while devouring the Mezethes (appetizer) platter – more than enough food for two people! I only wish I’d saved room for some baclava…

On the crisp Saturday morning we also ventured around the block to the Old Strathcona Farmers Market, where you could easily ingest a meal’s worth of samples from the fruit/veggie stands, Ukrainian meat tables, cheesemakers, and bakeries. 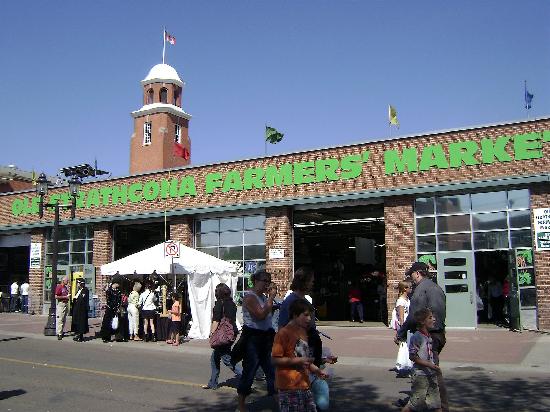 Sunday we packed our bags, saw a few last properties – including the one we’re hoping to make an offer on this week – and said a sad farewell to the Metterra, Old Strathcona, and Edmonchuk, that wondrous most northerly metropolis in North America. Ah, Edmonchuk, we will meet again soon and I will get to call you my home…

49 thoughts on “Adventures in Edmonchuk”