Since we got back from Colorado, Doug has been extremely busy with work (for those who were wondering, he passed his oral exams with flying colours) and I’ve settled into my new schedule of working on For the Love of Flying things in the morning and doing background research for my novel at the library in the afternoon.

Of course, life can’t be all work and no play! The weather’s been hot and sunny for the most part, so I make sure I get Riker out for his ‘big exercise’ first thing in the morning. Three times a week that means going for a jog around the neighbourhood, dodging the inevitable stray dogs and unsupervised children. The other mornings I take him on more off-road adventures and there are certainly oodles of off-road places nearby when you live in southwestern Wyoming. 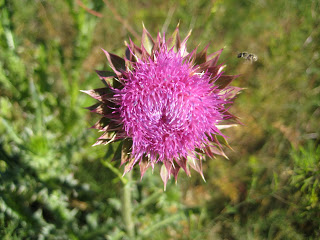 One of our regular walking spots (and a popular place with other walkers and bikers) is down at Scott’s Bottom/FMC Park. With the rainy spring, the vegetation is in overdrive down there and thistles (like the one in this photo that a bee is trying to gather pollen from) grow as tall as a person. Just this morning I was down there and spotted at least five mule deer. Luckily Riker couldn’t see them over the abundant field grasses and wild flowers! 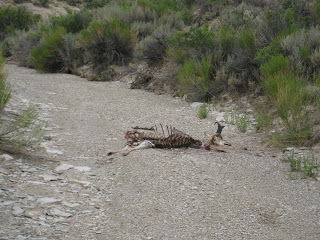 With a very Wyoming logic, the Scott’s Bottom nature preserve abutts (if you’ll pardon the pun) the archery and shooting ranges. If you continue on past there, however, there’s an access road that takes you to acres and acres of open scrubland. Doug and I headed over there with Riker last week on one of his rare days off. The circle of life is in plain view in this sometimes harsh landscape. 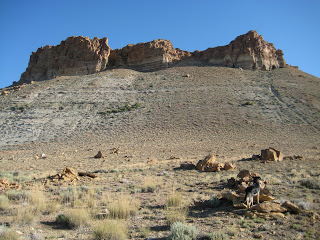 Last Tuesday I, in the local parlance, woke up with a wild hair/hare up my butt to do some hill climbing. So I packed my day bag, “borrowed” Doug’s sunglasses, and drove down to Scott’s Bottom. There, I took a side path (which might just be the dry bed of an intermittent stream) and followed the game trail to the left. It was still pretty early, but the sun was warm, and I was certainly feeling the exertion as I crested one hill. Then I looked up and saw this butte (above) and decided to try and climb it. 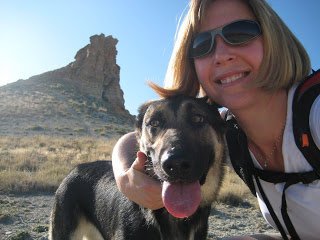 Luckily in this butte’s case, there was a back way up, so I picked my way along the trails the pronghorn antelopes and mule deer had made, observing the occasional scat from coyote and other animals as I tried not to look down. 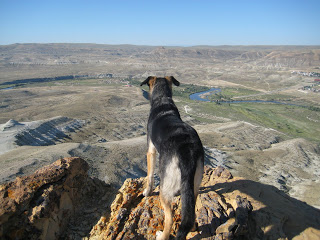 What a view from the top, though! Riker and I paused for a drink and to watch the hawk that was circling (likely hunting the swallows and field mice we saw) heard it give three of those otherworldly cries that always awe me. When we turned around to start picking our way back down, I noticed a buck antelope that was keeping an eye on us. Then he started moving away, and I saw that he was standing guard over a group of at least five female antelope (his fall harem), making coughing noises to warn them of potential danger (i.e. me).

They don’t have anything to worry about from Riker and me, though, since they can reach speeds of almost 100km/h for several minutes (they evolved in North America when there were prehistoric cheetahs hunting them). Me, I’m happy putting one foot in front of another to explore the area while keeping my butt in shape!