Skip to content
Although I missed my official book launch at the Book & Bean in Green River, WY on June 15th because of car problems, the owner and I decided to schedule a little meet and greet on Saturday, June 20th. I made sucre a la creme (using my aunt Micheline’s recipe) and gave out maple candies to the few folks who came by to chat.
On Wednesday the 24th, possibly the sunniest, warmest day the county had seen so far this summer, I was scheduled to give a talk at the White Mountain Library in Rock Springs. I had my powerpoint slides all set and when I arrived it was a great room with a big screen and ceiling-mounted projector. The weather was not conducive to an indoor event, though, and even with decent local media coverage the turnout was small. It’s quality not quantity that counts, however, and we had a great chat.
The weather was iffy on Friday the 26th when some friends and I set up our booth at Festival in the Park, part of Flaming Gorge Days here in Green River. The day began with torrential rain but tapered off a bit while we put up our sun/rain shelter. Halfway through the afternoon a thunderstorm hit us again and we all huddled together trying to protect our wares. Saturday the weather was much nicer and the Festival was much busier, but we all realized that people were there for sno-cones and Made-in-China souvenirs and were not interested in our artisanal products (my book, hand-made pottery, garden-planning “flower fan,” and broadsheets). As Doug remarked after a few hours of people watching: this is definitely not your target market. I guess I should have known when one of the headlining events was cage fighting. 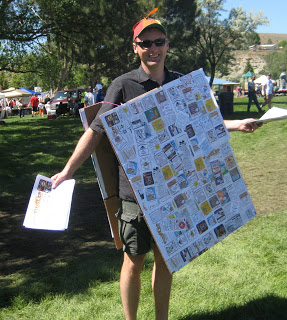 My friend and booth-mate, Luke, handing out his self-published broadsheet, The Fiddler at Festival in the Park.
So after a tiring few months of deadlines and travelling and a pretty disappointing result from my Wyoming events, I decided to take a week or so off to relax and spend some quality time with Doug and the pets. One of our first orders of business was to head to Recreational Equipment Inc (REI) in Salt Lake City to purchase our camping gear. Then of course we had to go test it out. Which we did July 1st (both Canada Day and Doug’s birthday) at the Popo Agie (pronounced popo-zha) Wilderness Area in the Shoshone National Forest. 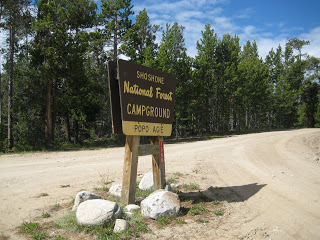 We stayed at the Popo Agie Campground, a no-fee, no services grouping of tent sites with very limited vehicle access. We were actually there the first day that section opened (it’s an alpine region so the snow recedes later) and no one else was camped. We loved the seclusion but the mosquitoes were plentiful in all the little snow-melt ponds and chased us out a day early. But we got the chance to test our gear in sun, hail, wind, and heavy rain – all in one 24 hour period! And Riker has decided he loves camping – especially weenie roasts. 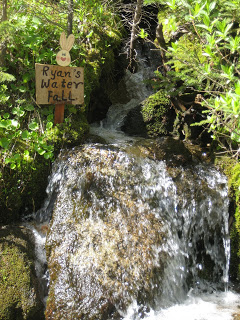 Roadside “waterfall” in Shoshone National Forest
We attempted a hike from Christina Lake trailhead, but I hadn’t slept very well (who knew nature was so noisy at night?!) and the bugs were really getting on my nerves. So we called the trip and decided to go home, catch up on rest and regroup. This turned out to be a very good idea as I seemed to come down with a 24-hour bug once I got home and was out of commission yesterday. 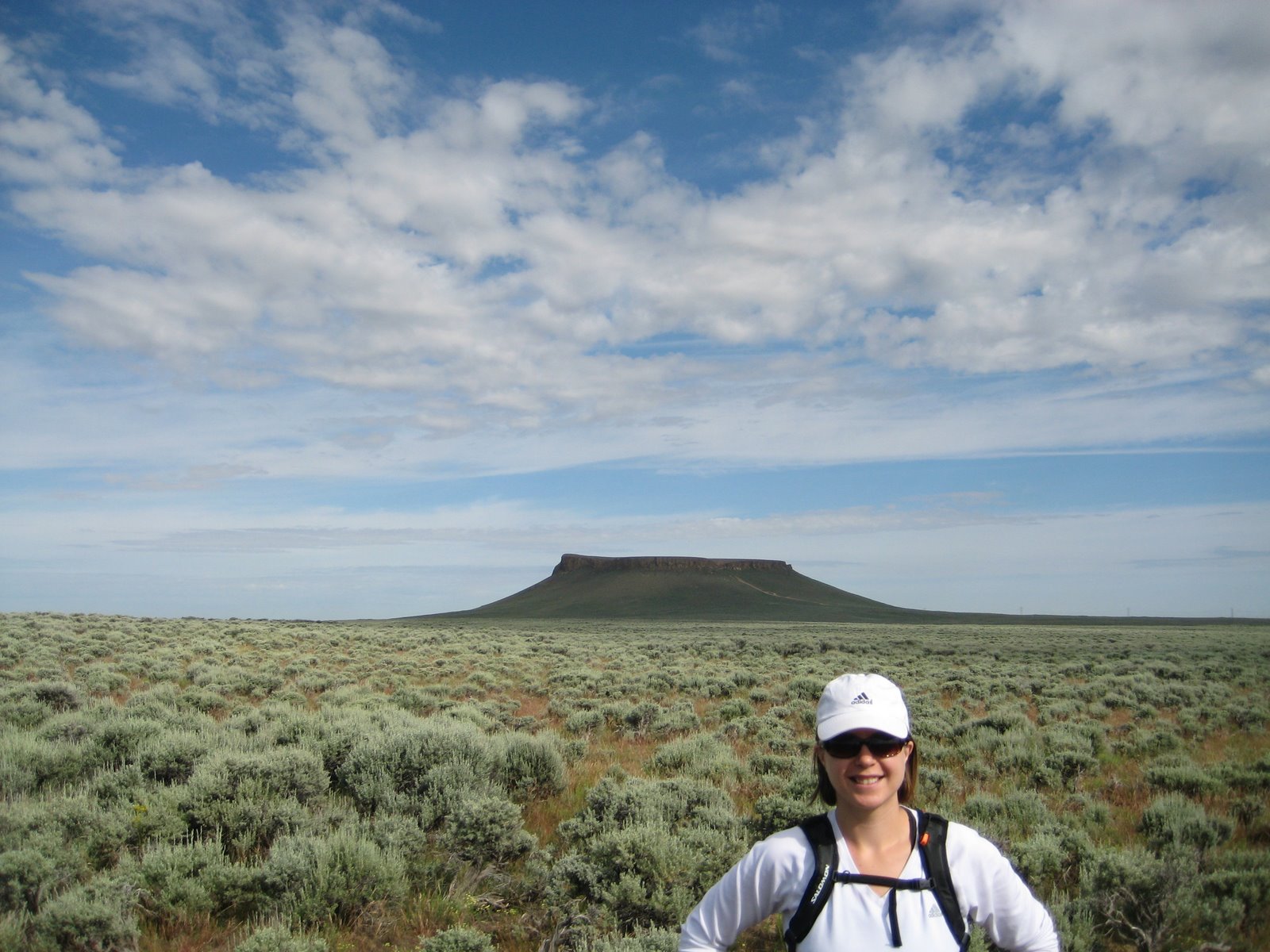 This morning I felt great, though, and Doug and I headed for a hike up White Mountain to Pilot Butte (the rock formation behind me). We drove a short ways north to the Wild Horse Loop and then deked onto a track for a few kilometers before getting out and tramping through the sage brush. In the process I startled two pairs of sage grouse which made me screech and just about gave me a heart attack. But we made it and had a great hike, seeing several wild horses, pronghorn antelope, and what I think was a red-tailed hawk. 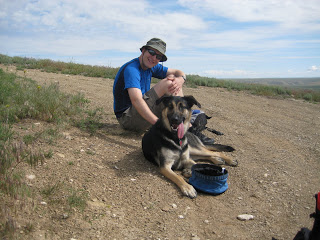 Riker is loving all this fresh air and exercise. We even bought him his own collapsible “Adventure Dog” bowl for trips. We’ve also discovered that the farther out his tongue hangs, the more tired he is. The tongue in this picture lets me know he will be comotose for the next day! Sure enough, as I write this, he has been passed out at the bottom of the stairs pretty much since we got back four hours ago… 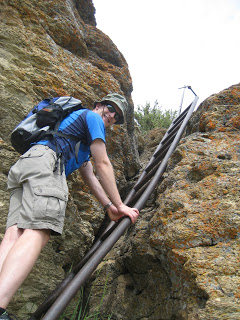 At Pilot Butte there’s a metal ladder to get you to the very top. It’s pretty solid, but still a little nerve wracking.

One thought on “Launching Summer”