Skip to content
The next stop in my UK travels was to see my friend, Monica, in Canterbury, England. So on Sunday, January 25th I boarded a flight from Edinburgh to London Gatwick, took the Gatwick Express train to London Victoria rail/coach terminus and caught a bus heading east. This was definitely the leg of my trip where I was most grateful for my hiking backpack and duffel combo – a wheelie suitcase would have been such a pain!
Monica was waiting for me at the bus stop and it was so welcome to see a smiling face after my travels! Moni and I survived our MA’s together and, like anyone who has been to war and back, we have a fierce unspoken bond. Although we both declared after graduation that there was no way in heck we’d do our PhD’s for a good long while, she capitulated and is now at the University of Kent in Canterbury working away on 17th century masculinity and horsemanship.
So us two history geeks grabbed the bus back to where she’s living on the outskirts of town. By then it was about supper time so we decided to try out this pub down the way. Braving the rain, we walked the 10 or so minutes with our hoods up, and found ourselves in front of an unassuming little pub called the Hare and Hounds. It looked like any other pub I’d been in: footie was on the tv, there were a group of men at the bar drinking beers and commenting on said footie game, etc. We settled ourselves into a table, I ordered my one and only Guinness of the trip, and asked to see menus. What a surprise that was! No run-of-the mill pub fare here: we each ordered the pear-stilton-watercress salads as a starter and had delicious pub-inspired mains that were beyond delicious. Then we shared a pear crumble for our pudding (what the Brits call dessert) while sipping one of the best darn decaf coffees of my life! Whoever said food in the UK was bad is very mistaken or just very unlucky.
The next day Moni and I headed into the town of Canterbury where we basically shopped till we dropped, people-watched, and enjoyed catching up with each other’s lives. Moni found the perfect skinny jeans after a long hunt and I stocked up on knickers (gotta love that word!) at Marks and Sparks. And of course I breezed by the Canterbury Cathedral, appreciating its architecture but not willing to spend the 9 GBP to explore its innards. 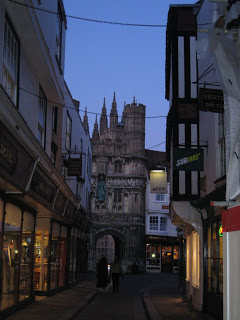 A shot of the Canterbury Cathedral at dusk through the narrow, shop-filled streets.

On the last morning of my all-too brief visit, Moni let me tag along to her supervisor’s undergrad course on 18th century English literature. I was enthralled: the topic was Samuel Johnson, whom I’d never heard of before. I will definitely have to look into more of his stuff, though – love the irony and sarcasm! Dr. Landry started off her lecture by showing a clip of an episode of the classic British show, Blackadder, in which Samuel Johnson is trying to explain to the king that his new book – the first English dictionary – is not a novel. Of course, hilarity ensues!

Aerial shot of the University of Kent – best seen from far away since it was all constructed in the 1960s-1970s and is really quite unattractive!