Skip to content
I realize I’ve been home for a week and still haven’t written up the final leg of my UK journey. Here goes!
The last couple of days I was in the UK I spent with my lovely friend, Emily, in north London. Emily and I met while I was on university exchange in Leeds in 2003-4. She is another fellow history geek and we immediately hit it off in our Victorian England class and soon had a standing Thursday lunch date. We’ve stayed in touch and she was foolish – I mean, nice – enough to offer me a place to stay during my trip.
By this time I had developed a sore throat and was getting a little tired of all the travelling, but it was great to catch up with old friends. The first night we met two of my other British friends, Caroline and Suz, for dinner at the very exotic Gallipoli, a Turkish restaurant, on Upper Street (apparently a hip, posh area). Then the next morning Emily filled me up with good strong tea and showed me King’s College, where she’s doing her Ph.d. in History. We had a quick bite to eat at the cafe in the Courtauld Gallery but skipped on the art. And then we wandered around some beautiful courtyards where you couldn’t hear all the traffic and construction noises, and went into Temple Church – recently made famous by the DaVinci Code. I really felt transported back in time, trying to imagine what 17th century London must have been like… 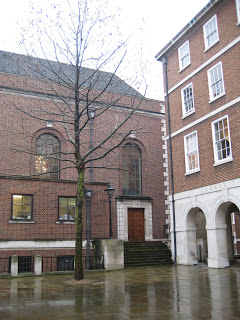 The courtyard by Temple Church

We escaped the drizzle into The Old Bank of England, which is now an impressive pub that serves an afternoon tea that is to die for: finger sandwiches, scones with clotted cream, little tarts and cakes with fruit. And, of course, a pot of your choice of tea (I really believe you can profile people by the tea they drink. I’m Earl Grey and Emily is Traditional English Breakfast. What are you?) 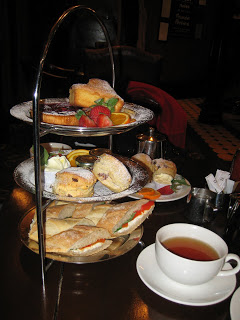 The next day we went to see Slumdog Millionaire, an incredible movie set in India, before she drove me to the local grocery store to stock up on British goods I can’t get in the area: curry, naan bread, Dark Chocolate McVities Hob Nobs biscuits, Revels, Alpen cereal bars, scones. Into the duffel bag they went for a taste of England while in Wyoming!

And then we were off to the hotel I’d booked – no sense waking her household up at 3:30am the next morning – so I stayed at the Sheraton Skyline near Heathrow. After a lovely dinner, we said our goodbyes and I tried not to obsess about the weird tv-alarm thingy not working. But my subconscious didn’t trust it, and so I woke up pretty much every hour until it was time to get up and catch the airport shuttle.

The flight from London to Washington Dulles was longer than the way out – damn you, headwind! And when we arrived I was pretty out of it. So out of it, in fact, that I managed to lose my beautiful engagement ring somewhere between my seat and the security wicket, when I noticed something was missing on my left hand. The security agent was very understanding and sent me over to get help retrieving it. Despite valiant efforts by United Airlines and U.S. Customs we did not recover the ring. What I did manage to do, however, was miss my connection to Denver, although my bags did not.

What ensued was a lot of bleary-eyed running around to the United desk, being put on stand-by for the next flight to Denver which would have gotten me in on time for my connection to Rock Springs. But I was too far down the standby list, so was bumped to the next Denver flight, which landed there at the exact moment my Dash-8 took off for Wyoming (with my bags on board). As you can imagine, Rock Springs is not the most popular travel destination, and so there are only two flights per day. The next one was at 11:30am – the next day.

So it was about 6:30pm in Denver when I landed (1:30am England time) and I’d been travelling for what felt like a really long time. This also happened to be the first time in a long time that I had not packed a proper overnight bag for the trip, mostly because my duffel bag was now packed with British goodies and so I’d checked it. Luckily the nice people at United gave me a toiletries package but I decided I really needed some clean clothes to be able to change into the next morning. When you’re exhausted you don’t make the best choices, and I ended up buying a $10 pair of socks and a $30 shirt that is the most ill-fitting thing you could imagine. But you know what, I will wear until they are in shreds for those prices!

I ended up at the Aloft hotel, a trying-to-be-hip, techno-music-in-the-lobby, Wired magazine in the rooms, kind of place. It was all a little much, but after a slightly soggy wrap, a shower, and an episode of What Not to Wear I almost felt human. And then the most amazing thing happened: I found the plane-issued Twix Bar that I thought I’d lost along with my engagement ring. And you know what? In that precise moment, I think I was happier to see the chocolate bar!

After sleeping for twelve hours I got up, grabbed some breakfast and headed back to Denver airport, which is quite a pretty one when you’re not drop-dead tired. Feeling giddy, I got onto the Dash-8 with my minimal luggage, and was so happy to get my bags (which were patiently awaiting me), get in my car, and go home to Guinness and Riker.

Postscript: Still no sign of the engagement ring and it turns out it wasn’t insured. As Doug (who perpetually loses thing) said to me, this is his get-out-of-jail-free card for the next twenty years. Yup!

94 thoughts on “The London Leg”