To balance out the heaviness of the previous post, I’d like to draw inspiration from the American media which basically has the following M.O.: “We will hear more about the tragedy that occurred last night shortly. For now, let’s look at this hilarious footage of a squirrel water-skiing!”

Ok, so I don’t have a video of a rodent engaging in death-defying stunts (although I could probably find one on Youtube pretty quickly!), but I do have some cute shots of the dog and cat. 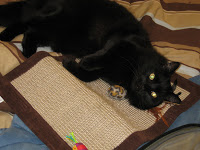 Guinness was not very pleased about being left alone for the week I was in Ottawa. So I bribed him to love me again. I really felt like one of those stereotypical tv fathers from the 1950s who go on long business trips but bring their kids home treats and therefore are heroes. Guinness just loves his new Canadian catnip-infused scratch pad and toys. And by extension, he loves me again. 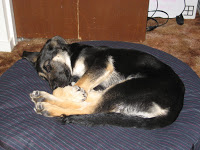 Riker seemed happy enough at the boarding facility I left him at. The vet techs love him and he was, after all, in the ‘luxury suite’ called the Sun Room. As the lady told me, “he’s pretty hyper so we’ll put him in the biggest room.” Apparently he made friends with a young English Mastiff, but the dog’s owner left before I could set up a puppy play-date. Zut alors!

I don’t know what they were feeding Riker at the kennel, but I swear he’s doubled in size in the past week. He now barely fits on his favourite look-out perch, and it is becoming quite hazardous for me to carry a cup of tea up to my desk!

2 thoughts on “On a much lighter note!”